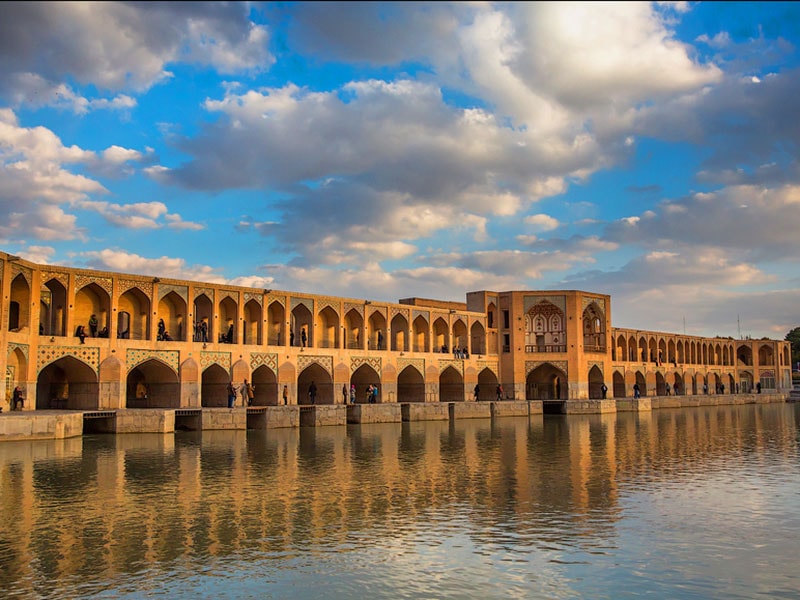 Khaju Bridge or Khajoo Bridge is known as the most beautiful of Esfahan’s bridges, with traces of the original paintings and tiles that decorated its double arcade still visible, Pol-e Khaju was built by Shah Abbas II in about 1650, but a bridge is believed to have crossed the waters here since the time of Tamerlane.

It is about 132 meters long and 12 meters wide. The Khaju Bridge is made of two decks (floors). This bridge was built to work for different purposes. As a bridge connected the old Isfahan to villages located on the southern side and also connected Isfahan to Shiraz road. It was built as a wonderful recreational place. Steps in front of bridge and arches in the first deck have been used to relax and listen to the sound of water. It was used as a dam too. Water canals of bridge were closed during spring and summer seasons. Water was reserved on the western side of bridge, then diverted to Maddies and distributed to different districts of city, used for gardening, and agricultural purposes.

It has 23 arches with a length of 133 meters and width of 12 meters. The bridge passway is 7.5 meters wide and this two-storey bridge is made of bricks and stones. It is good to mention that it has 21 larger and 26 smaller inlet and outlet channels. Notably, the stone pieces used in the bridge are 2 meters long.

During the Safavid period, the court and its nobles gathered there to watch spectacular pyrotechnic shows and water competitions. In the midsummer of each year, the festival of Ab-pashan (“water splashing”) was held in the vicinity of the Khaju Bridge. Both the rich and the poor gathered along the river banks and splashed water on each other in belief that it will purify them from illness and harm.
Water also served more prosaic, but not less important service, washing away excesses of lime from the soil, and making it suitable for cultivating the renowned melons of Esfahan. The dam is still used to raise the level of the river sufficiently to fill irrigation canals (madi) on either side of the river.