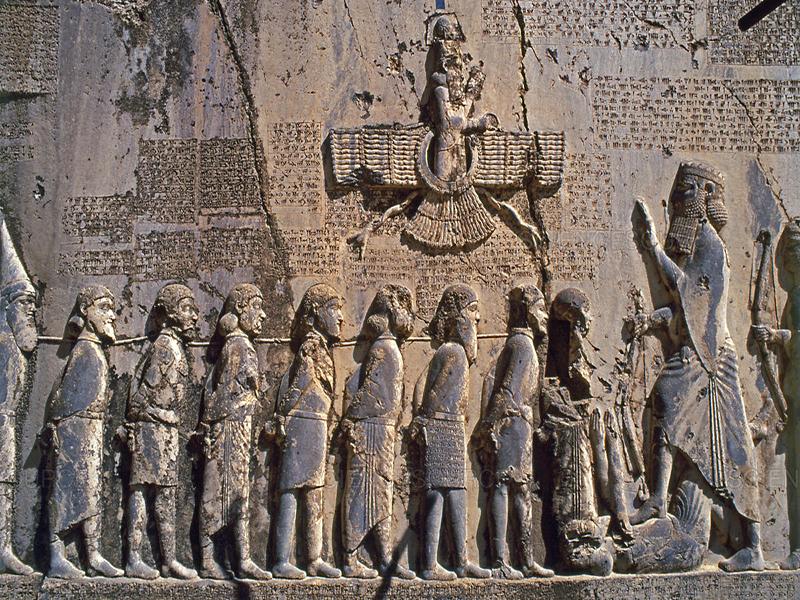 The Behistun Inscription also Bisotun, Bistun or Bisutun‎, Old Persian: Bagastana, (meaning “the place of god”) is a multilingual inscription and large rock relief on a cliff at Mount Behistun, located on an ancient trading route in current Kermanshah which connected Iranian Great Plateau to Mesopotamia and its characters remain from prehistoric times to Median, Achaemenid, Sassanid and Ilkhanid Periods. The main inscription which is a base relief and cuneiform was constructed upon the order of Darius l when he became the king of Iran in 521 BC. This inscription shows Darius while he is carrying a bow, indicating his kingdom and walking with a figure who lies on his back. Considering different stories, that figure shows Guamata, the Median Magus and pretender to the throne, the person who Darius succeed to be the king after he was assassinated. There are about 1200 lines of inscription around the bas reliefs. They depict Darius’s battles against those governors who tried to be separated from the Empire Cyrus founded in 521- 52 BC. Three different languages are seen in the inscriptions. One of them which is believed to be the oldest, refers to the legends about the king and rebellions and is an Elamite text followed by a Babylonian version of similar stories. Due to the fact that Darius had experienced hid deeds on the last part of the inscription in the Old Persian, it has special importance. If you are interested in visiting this magnificent heritage of the ancient time, you could ask Alaedin Travel for a tour to Kermanshah or a tour to Iran or have the opportunity to explore this wonderful land.

It was crucial to the decipherment of cuneiform script as the inscription includes three versions of the same text, written in three different cuneiform script languages: Old Persian, Elamite, and Babylonian (a variety of Akkadian). The inscription is to cuneiform what the Rosetta Stone is to Egyptian hieroglyphs: the document most crucial in the decipherment of a previously lost script.

Authored by Darius the Great sometime between his coronation as king of the Persian Empire in the summer of 522 BC and his death in autumn of 486 BC, the inscription begins with a brief autobiography of Darius, including his ancestry and lineage. Later in the inscription, Darius provides a lengthy sequence of events following the deaths of Cyrus the Great and Cambyses II in which he fought nineteen battles in a period of one year to put down multiple rebellions throughout the Persian Empire. The inscription states in detail that the rebellions, which had resulted from the deaths of Cyrus the Great and his son Cambyses II, were orchestrated by several impostors and their co-conspirators in various cities throughout the empire, each of whom falsely proclaimed kinghood during the upheaval following Cyrus’s death.