pasargadae – Tomb of Cyrus the Great 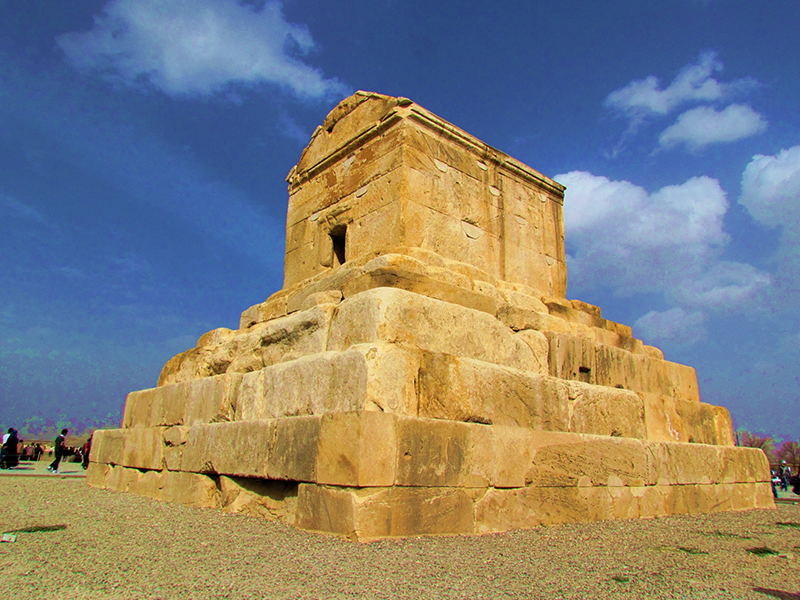 Pasargadae was one of the oldest residences of the Achaemenid kings, founded by Cyrus the Great (r.559-530). It resembled a park of 2×3 km in which several monumental buildings were to be seen. According to the Roman geographer Strabo of Amasia, the palace of Pasargadae was built on the site where king Cyrus (r.559-530) defeated the leader of the Medes, Astyages, in 550 BCE (Strabo, Geography, 15.3.8). The battle is a fact, also mentioned in the Nabonidus Chronicle, and there is no evidence to contradict that it took place on the Murghab plain, but the context contains errors, so we should not place too much confidence on it. However, that Cyrus was indeed the builder of this town, can be corroborated from the fact that the building inscriptions in the palace, known as CMa, mention Cyrus, the great king, an Achaemenid. If he did not build the palace on this site because of a military victory, there may have been other reasons: the place is beautifully situated in the center of a fertile plain, on all sides surrounded by mountains. It is essentially a valley that was filled by sediments from the river Pulvar. Pasargadae is listed by UNESCO as a World Heritage Site.

It is best to imagine Pasargadae as a group of garden pavilions in a park: essentially a camp of nomads, but made out of natural stone. Stylistically, the Audience Hall, the Residential Palace, the garden pavilions A and B, and the Gate belonged to the architectural tradition of the Iranian nomads, who lived in large tents. However, Cyrus used elements from other cultures as well: sculptures from the Assyrian palaces were used as models, work may have been done by stonemasons from Greek Ionia, and a hybrid demon guarded the gate. Perhaps the population of the city had a similar, mixed character. The small tomb of king Cyrus is situated a little to the southwest. It was venerated by later rulers, a.o. the Macedonian king Alexander the Great, who ordered restorations in January 324 BCE. King Darius I the Great (522-486) built a new capital, Persepolis, forty-three kilometers downstream along the river Pulvar. However, Pasargadae remained an important place, probably as the religious capital of the Achaemenid empire where the inauguration of the kings took place. You can read a description over here. Perhaps, the sanctuary in the northwest played a role in the ceremonies.

Sustaining the Outstanding Universal Value of the property over time will require examining, developing, and implementing methods for controlling erosion resulting from various factors (physical, chemical, environmental, etc.); minimising or eliminating any damage that may result from agriculture or from flooding; avoiding excavations that put the archaeological remains at increased risk; preventing damage caused by vandalism by training the guards and raising the awareness of local people; and preventing any improper expansion of the inhabited areas (villages, for instance) that may have a negative impact on the Outstanding Universal Value, integrity or authenticity of the property.