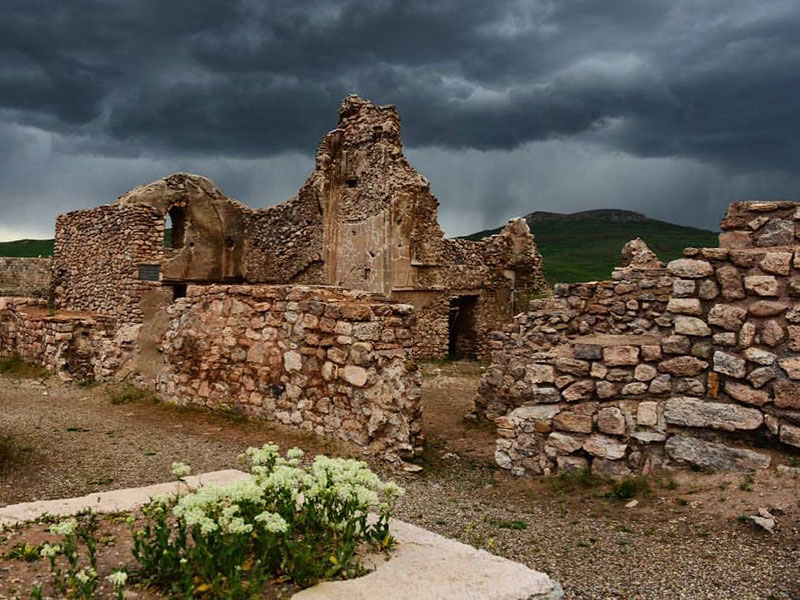 Takht-e Soleymān, is an archaeological site in West Azarbaijan, Iran from Sasanian Empire. It lies midway between Urmia and Hamadan, very near the present-day town of Takab, and 400 km (250 mi) west of Tehran.

The fortified site, which is located on a hill created by the outflow of a calcium-rich spring pond, was recognized as a World Heritage Site in July 2003. The citadel includes the remains of a Zoroastrian fire temple built during the Sassanid period and partially rebuilt (as a mosque) during the Ilkhanid period. This temple housed one of the three “Great Fires” or “Royal Fires” that Sassanid rulers humbled themselves before in order to ascend the throne. The fire at Takht-i Soleiman was called ādur Wishnāsp and was dedicated to the arteshtar or warrior class of the Sasanid. A 4th century Armenian manuscript relating to Jesus and Zarathustra, and various historians of the Islamic period, mention this pond. The foundations of the fire temple around the pond is attributed to that legend. Takht-E Soleyman appears on the 4th century Peutinger Map.

This site got its biblical name after the Arab invasion of Iran in the 7th century. Folk legend relates that King Solomon used to imprison monsters inside a nearby 100 m deep crater which is called Zendan-e Soleyman “Prison of Solomon”. Solomon is also said to have created the flowing pond in the fortress.

Archaeological excavations have revealed traces of a 5th-century BC occupation during the Achaemenid period, as well as later Parthian settlements in the citadel. Coins belonging to the reign of Sassanid kings, and that of the Byzantine emperor Theodosius II (AD 408-450), have also been discovered there.